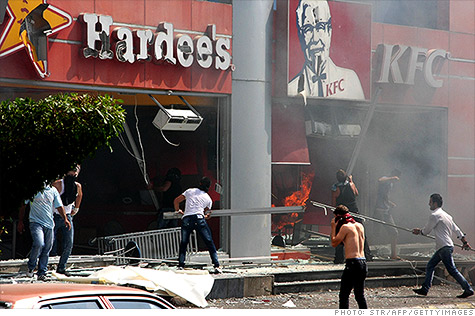 Yum! Brands is shuttering all of its KFC franchises in Pakistan in the wake of anti-American protests there, after one of its KFC restaurants was attacked in Lebanon last week, the company said Friday.

“Our KFC restaurants in Pakistan are closing as a precautionary measure,” said Yum! Brands (YUM, Fortune 500) spokesman Christopher Fuller. “They will continually monitor the situation to decide when to re-open.”

KFC has more than 60 restaurants in 21 Pakistani cities, and has a significant presence throughout the Muslim world. A division of the company called KFC Arabia has franchises in 11 Middle Eastern cities.

On Sept. 14, protesters enraged by a crudely-made anti-Islam video produced in the U.S. attacked a KFC restaurant and two other American franchises — a Hardee’s and a Krispy Kreme (KKD) — in Tripoli, Lebanon.

Cho Won-hyuk stands in front of his bedroom mirror and spreads dollops of yellow-brown makeup over his forehead, nose, chin and cheeks until his skin is flawless. Then he goes to work with a black pencil, highlighting his eyebrows until they’re thicker, bolder.

“Having a clean, neat face makes you look sophisticated and creates an image that you can handle yourself well,” the 24-year-old college student said. “Your appearance matters, so when I wear makeup on special occasions, it makes me more confident.”

Cho’s meticulous efforts to paint the perfect face are not unusual in South Korea. This socially conservative, male-dominated country, with a mandatory two-year military conscription for men, has become the male makeup capital of the world.

South Korean men spent $495.5 million on skincare last year, accounting for nearly 21 percent of global sales, according to global market research firm Euromonitor International. That makes it the largest market for men’s skincare in the world, even though there are only about 19 million men in South Korea. Amorepacific, South Korea’s biggest cosmetics company, estimates the total sales of men’s cosmetics in South Korea this year will be more than $885 million.

The metamorphosis of South Korean men from macho to makeup over the last decade or so can be partly explained by fierce competition for jobs, advancement and romance in a society where, as a popular catchphrase puts it, “appearance is power.” Women also have a growing expectation that men will take the time and effort to pamper their skin. 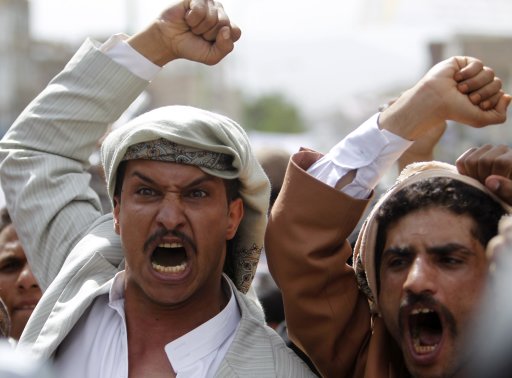 Social media websites are flush with death threats for Nakoula Basseley Nakoula, the newly unmasked 55-year-old filmmaker behind the anti-Islam film that is being blamed for nearly a week of violent unrest in the Middle East.

Nakoula was detained briefly over the weekend in California after federal officials questioned whether the production of the film violated the terms of his probation, which stemmed from a 2010 arrest for bank fraud. In response to security concerns, law enforcement kept him under heavy guard during his transport to a local police station.

“Insallah [God willing], we will kill him,” one Facebook user, Shayan Khan, wrote from Karachi, Pakistan.

Some YouTube users envisioned particularly imaginative demises for Nakoula in the comments section of a video related to his detention.

“I wanna torture him with a shot [to] his knee cap, then blow his eyes with [a] knife, take a chain saw and cut his penis, then a hot rod would be given to his ass, then kill him until he is hanged till death,” funkyfolk1110 wrote. “Kill this bastard,” said another user.

On Twitter, a user named Yayan E. Putra posted, “Fuck Nakoula Basseley, i want to kill you!!!” The message starkly contrasted with Putra’s brief Twitter profile, which stated simply, “A smile is the little thing that can make life easier.”

“Someone please kill him,” agreed Nelson Davis, a retired market researcher living in New York, who earlier on Sunday invited his Twitter followers to “Choose your free Obama sticker!”

“If extremists have a problem with Egyptian-American convicted felon/filmmaker Nakoula Basseley Nakoula, kill him, not other innocent people,” reasoned another Twitter user.

Many called for censorship instead of violence. On the social petition website Change.org, nearly 5,000 users called on governments worldwide to ban the distribution of “Innocence of Muslims.”

A Muslim cleric hosting an Egyptian television show recently outlined his version of Islamic instructions for wife-beating. In another show, a cleric claimed that the Muslim Brotherhood, now governing Egypt, one day will rule the world.

“If not through peace, there is nothing preventing war. We welcome war,” said the second cleric, who added that “one of the tenets of the Muslim Brotherhood, which they cannot renounce,” is the goal of global dominance by an Islamic caliphate.

The shows aired on Egypt’s Al Nas network, a hard-line Salafist Muslim outfit that for years has flown largely under the radar of international observers.

The network was thrust into the spotlight last week when it broadcast Arabic-dubbed movie clips from what it described as an English-language film insulting Islam’s Prophet Muhammad. Riots and protests erupted throughout the Middle East and other parts of the Muslim world.