You’ve heard of Black Friday, the darkest day for American capitalism; Cyber Monday, where everyone gets out their latent shopping aggression online; now there’s even Grey Thursday, as retailers open on Thanksgiving Eve to get an edge on the competition. But, friends, have you heard of Brown Friday?

On today’s day-after-Thanksgiving madness, in their frenzy to GET THOSE DEALS, shoppers will make all sorts of bad decisions when it comes to properly evacuating their bowels. In fact, stores across America are already inevitably besmirched by poop. All of which is no doubt exacerbated by the fact that the entire country has just spent the past 24 hours eating their biggest meal of the year. (For the ones who make it to the toilet, Roto-Rooter sees a “substantial uptick in calls” for service on the day after Thanksgiving, says spokesman Paul Abrams. “Usually between 47 to 51 percent.”)

It’s a phenomenon that you likely haven’t heard about unless you’ve worked in retail, but there are some scary stories out there if you know where to look.

Reddit user Dave_Versus_Volcano posted his story about working at a Best Buy one Brown Friday. When an estimated 1,500 people entered the building at 6:00 a.m., the line for the checkout snaked deep into the store, all the way into the appliance department. After responding to a customer’s complaint, the employees discovered a “turd of good size” and “solid consistency” sitting in one of the dryers. “A lady who did not want to lose her spot opened the dryer, and shat right there in front of everyone,” he reported.

Some commit their Brown Friday acts even more brazenly, says Reddit user galindafiedify, who posted a similar story of working in a department store. During a chaotic midnight opening, a man was spotted doing something suspicious. Shortly thereafter, customers rapidly lost their holiday cheer as they realized the mysterious substance collecting at the bottom of the escalator… was actually shit. “One of the managers showed up and tried calming people down. Housekeeping was called and they turned off the escalator and barricaded it off. Now, while all this was happening people had been tracking shit all over the tile floor,” galindafiedify writes. “Later I found out that the guy just dropped his pants at the bottom of the escalator and pooped.”

Thanks to Mike F. for the tip!

For Retailers, Today Really Is the Shittiest Day of the Year 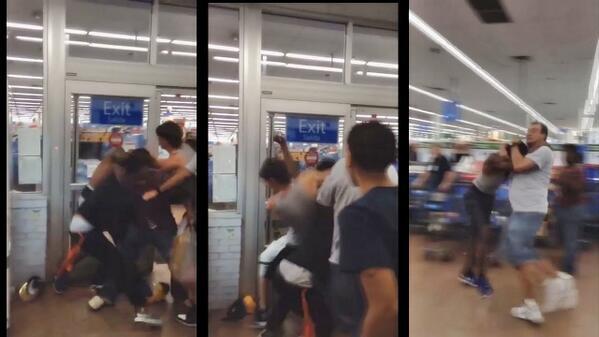 Not only are Black Friday sales less than they’re cracked up to be, the day-after-Thanksgiving national shop-a-thon is getting dangerous.

Starting late on Thursday night, Anonymous-linked Twitter account @YourAnonNews began encouraging Twitter users to document fights seen outside retailers open for for the holiday using the hashtag #WalmartFights. The hashtag began to trend nationally around 11 pm EST, as scuffles around the country were Tweeted, Instagrammed, and Vined. 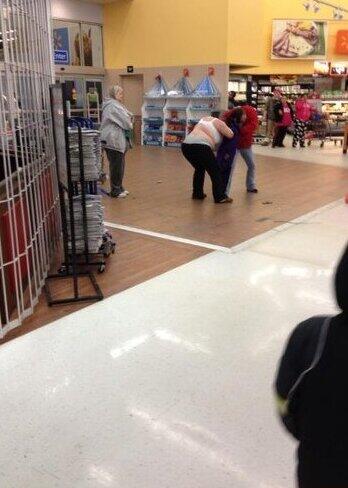 Mall managers across the country said shoppers still arrived in droves but the earlier openings led to a smoother flow of traffic throughout the night, instead of the usual rush at midnight. Edward Larson, who manages a J.C. Penney in Great Falls, Mont., said customers were “more purposeful and not as frenzied.”

The Town East Mall in the suburbs of Dallas opened at 8 p.m., and thousands made their way to Macy’s (M, Fortune 500), Sears (SHLD, Fortune 500) and J.C. Penney. (JCP, Fortune 500) Their demeanor was more calm and reserved than in years past, said mall manager Chad Hastings.

“This is definitely a game changer,” Hastings said. “In future years, the customer will expect stores to open at 8:00.”

Even those who stayed home found it hard to resist the deals, with a record number of people shopping online Thanksgiving Day. Department stores tallied 20% higher online sales on Thanksgiving Day alone this year, according to data collected by IBM. Just over a quarter of them used their smartphones to make purchases.

Shoppers say workers should be home with their loved ones. But it won’t stop them from heading out anyway.

“I don’t like that the hours are earlier. I think people should be able to be with their families on Thanksgiving,” said Kim Schaefer as she shopped for shoes at J.C. Penney.

At a Target in Philadelphia, Qiana Roberts skipped Thanksgiving dinner for a spot in line. Collin Cook ate extra early on Thursday to join the masses at J.C. Penney in Wayne, N.J.

And that’s why businesses are throwing up their hands and saying: ‘It’s not us. It’s you.’

“We’re a service industry,” said Wal-Mart’s U.S. CEO Bill Simon. “If the traffic is any indication, they clearly want to shop on Thursday evening. We’ll provide that for them.”

This year’s early start to Black Friday proves Thanksgiving as you know it is gone. – Nov. 29, 2013

A Kuwaiti woman was arrested in Saudi Arabia for trying to drive her father to hospital, a Kuwaiti newspaper reported on Sunday, a week after Saudi women protested against a ban on female drivers.

Kuwaiti women are free to drive in their country and enjoy far more rights than those in Saudi Arabia, who are not allowed to travel abroad, open a bank account or work without permission from a male relative.

The English language Kuwait Times said the woman was driving in an area just over the border, with her father in the passenger seat, when she was stopped by police. Kuwaitis and Saudi locals regularly cross the border and communities living along the frontier are often a mix of people from both countries.

The woman, who said her diabetic father could not drive and needed to be taken to hospital for treatment, is being held in custody pending an investigation, the paper said, citing police.

The paper did not suggest that the woman was protesting Saudi Arabia’s ban on female drivers.