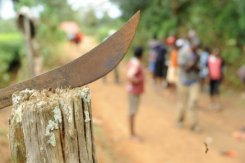 Attackers collecting body parts of albinos for witchcraft have hacked off the hand of a seven-year old boy in Tanzania, the latest in a series of bloody assaults, officials said on Sunday.

“The boy was attacked on Saturday by three people as he walked home with his four school friends,” said Apolinary Macheta, the local government leader in Tanzania’s southwestern Milepa district.

The boy, Mwigulu Magessa, is recovering in hospital, Macheta added.

The attack came just days after an albino mother of four had her arm chopped off by machete-wielding men, with police on Saturday saying they had arrested five men after discovering the decomposing limb hidden in a field.

In Tanzania, albinos are killed and dismembered due to a widespread belief that charms made from their body parts bring good fortune and prosperity.

Albinism is a genetic condition characterised by a deficiency of melanin pigmentation in the skin, hair and eyes which protects from the sun’s ultraviolet rays.

People suffering from the condition are discriminated against and persecuted in many African countries.

Last month an albino child died in Tanzania’s Tabora region after attackers hacked off his arm with a machete.

Kijo Bisimba, of Tanzania’s Legal and Human Rights Centre (LHRC) has said a rise in attacks is “alarming” and pointed to a renewed spate of assaults after what it said was months of calm.

Such ritual killings have also occurred in neighbouring Burundi and some of the attackers are suspected to be from Tanzania, where albino body parts can fetch thousands of dollars. 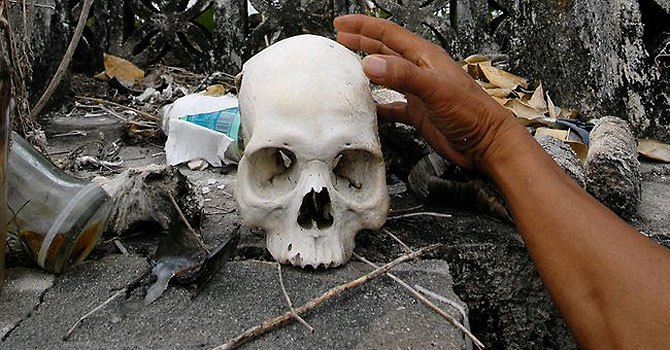 A young mother accused of sorcery was stripped naked, doused with petrol and burned alive in Papua New Guinea because she was allegedly a sorceress.

The woman, named by The National newspaper as Kepari Leniata, 20, was reportedly tortured with a branding iron and tied up, splashed with fuel and set alight on a pile of rubbish topped with car tyres.

According to the rival Post-Courier newspaper she was torched by villagers who claimed she killed a six-year-old boy through sorcery, with police outnumbered by onlookers and unable to intervene.

A fire truck that responded to the incident, which took place on Wednesday morning in Mount Hagen city in the Western Highlands, was also chased away.

According to the reports, which were accompanied by graphic front-page images of the woman’s burning corpse, she admitted to killing the boy, who died after being admitted to hospital with stomach and chest pains on Tuesday.

Police said they were treating the torching as murder and preparing charges against those responsible.

There is a widespread belief in sorcery in the poverty-stricken Pacific nation where many people do not accept natural causes as an explanation for misfortune, illness, accidents or death.

In 1971, the country introduced a Sorcery Act to criminalise the practice. But PNG’s law reform commission recently proposed to repeal it after a rise in attacks on people thought to practise black magic.

“Sorcery and sorcery-related killings are growing and the government needs to come up with a law to stop such practice,” Piso told The National.

Police arrested dozens of people last year linked to an alleged cannibal cult accused of killing at least seven people, eating their brains raw and making soup from their penises.

There have been several other cases of witchcraft and cannibalism in PNG in recent years, with a man reportedly found eating his screaming, newborn son during a sorcery initiation ceremony in 2011.

In 2009, a young woman was stripped naked, gagged and burnt alive at the stake, also in Mount Hagen, in what was said to be a sorcery-related crime.