As many as 100,000 women in Britain have undergone female genital mutilations with medics in the UK offering to carry out the illegal procedure on girls as young as 10, it has been reported.

Investigators from The Sunday Times said they secretly filmed a doctor, dentist and alternative medicine practitioner who were allegedly willing to perform circumcisions or arrange for the operation to be carried out.

The doctor and dentist deny any wrongdoing.

The practice, which involves the surgical removal of external genitalia and in some cases the stitching of the vaginal opening, is illegal in Britain and carries up to a 14 year prison sentence.

It is also against the law to arrange FGM.

Known as ‘cutting’, the procedure is traditionally carried out for cultural reasons and in Africa and with large numbers of immigration from countries like Sudan, Somalia and Ethiopia it is becoming more common in the UK.

It is believed to be proof of a girl’s ‘purity’ for when she marries, but victims often suffer in silence and are rarely given anaesthetic.

They frequently suffer long-term damage and pain and often struggle to stand or walk properly.

Research suggests that every year up to 6,000 girls in London are at risk of the potentially fatal procedure, and more than 22,000 in the UK as a whole.

The Metropolitan Police said since 2008, it had received 166 reports of people who fear they are at risk of FGM but it has failed to bring forward a single perpetrator.

It is the same for all 43 forces across England and Wales with no convictions for the offence ever taking place.

Only two doctors have ever been struck off by The General Medical Council since 1980.

The Sunday Times uncovered a respected dentist who was prepared to circumcise two girls, aged 10 and 13 and a GP who referred an undercover reporter to the dentist.

They also spoke to a supplier who deals in alternative medicine who offered to circumcise a 10 year-old girl for £750. Egyptian husbands will soon be legally allowed to have sex with their dead wives – for up to six hours after their death.

The controversial new law is part of a raft of measures being introduced by the Islamist-dominated parliament.

It will also see the minimum age of marriage lowered to 14 and the ridding of women’s rights of getting education and employment.

Controversial: The ‘farewell intercourse’ law is part of a raft of measures being introduced by the Islamist-dominated parliament

Egypt’s National Council for Women is campaigning against the changes, saying that ‘marginalising and undermining the status of women would negatively affect the country’s human development’.

Egyptian journalist Amro Abdul Samea reported in the al-Ahram newspaper that Talawi complained about the legislations which are being introduced under ‘alleged religious interpretations’.

The subject of a husband having sex with his dead wife arose in May 2011 when Moroccan cleric Zamzami Abdul Bari said marriage remains valid even after death.

He also said that women have the right to have sex with her dead husband, alarabiya.net reported.

It seems the topic, which has sparked outrage, has now been picked up on by Egypt’s politicians. 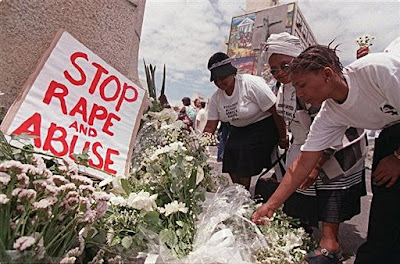 A video of a 17-year-old girl being gang raped spread by cell phones through South Africa on Wednesday, shocking a nation battling an epidemic of violence against women.

The girl was reported missing in late March and was apparently raped last week in the Johannesburg township of Soweto, police said.

Reporters from the tabloid Daily Sun brought the video to the attention of police, who found the girl on Wednesday and began arresting suspects.

“She was found with another man in his house,” Warrant Officer Kay Makhubele told the Sapa news agency.

“Obviously she is traumatised and we are going to take her to the doctor now,” he said.

The girl has the mental capacity of a four-year-old, according to the Eyewitness News website.

Watching the video is a crime under South Africa’s child pornography law.

The Star newspaper reported online that the video lasts 10 minutes and 33 seconds, showing her being raped by seven different males, as she screams: “You are forcing me, you are forcing me.”

The video’s spread has forced South Africa to confront its staggering incidence of rape. More than 56,000 cases were reported to police last year.

But the crime is often under-reported, like the case of the 17-year-old. A 2009 study by the government’s Medical Research Council revealed that only one in 25 rapes were reported to the police.

The same survey found more than one quarter of South African men admitted to raping a woman or girl.

Complete with red skirts, tunics, armour, swords and feathered helmets, the protesting centurions clashed with police in front of the city’s tourist attraction, the Colosseum, built in the times of Ancient Rome.

The policemen arrived at the ancient amphitheatre to enforce an eviction notice to the men, who normally ask tourists for money in exchange for a photograph with them.

Italy’s culture ministry said the men had no permits and often harassed and stalked tourists in addition for asking for exorbitant amounts of money.

Clashes with police broke out when city police arrived to remove two centurions who had occupied part of an arcade.

Some 25 centurions tried to stop the police, but during the scuffles, one of the protesters fell to his feet and was slightly injured.

Some onlookers joined in the protest in support of the centurions, saying: “Leave them alone. We are all centurions”. Christians were nailed to crosses in the Philippines today in a grim Good Friday reenactment of Jesus’s suffering.

Thousands of people watched as 17 devoted Catholics were crucified in the gruesome annual ritual.

Church leaders have condemned the practice which they believe are a distortion of the true Easter message.