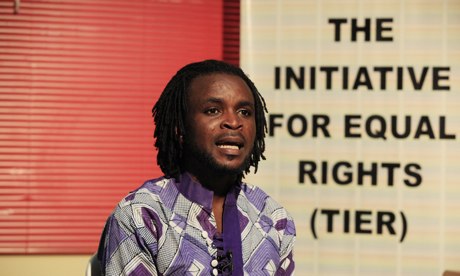 First the police targeted the gay men, then tortured them into naming dozens of others who now are being hunted down, human rights activists said Tuesday, warning that such persecution will rise under a new Nigerian law.

The men’s alleged crime? Belonging to a gay organization. The punishment? Up to 10 years in jail under the Same Sex Marriage Prohibition Act that is getting international condemnation.

Dubbed the “Jail the Gays” bill, it further criminalizes homosexuality and will endanger programs fighting HIV-AIDS in the gay community, Dorothy Aken’Ova, executive director of Nigeria’s International Center for Reproductive Health and Sexual Rights, told The Associated Press on Tuesday.

“Beyond even prohibiting same sex marriage, this law dangerously restricts freedom of assembly, association, and expression for all Nigerians,” Kerry said in a statement.

On Monday, President Goodluck Jonathan’s office confirmed that the Nigerian leader signed the Same Sex Marriage Prohibition Act that criminalizes gay marriage, gay organizations and anyone working with or promoting them.

The witch hunt in Bauchi state all began with a wild rumor that the United States had paid gay activists $20 million to promote same-sex marriage in this highly religious and conservative nation, according to an AIDS counselor.

He said he helped get bail for some 38 men arrested since Christmas. The man spoke on condition of anonymity for fear he too would be arrested.

He and Aken’Ova said dozens of homosexuals have fled Bauchi in recent days.

Aken’Ova, whose organization is helping with legal services for the arrested men, said a law enforcement officer pretending to be a gay man joined a group being counseled on AIDS. Police detained four gay men and then tortured them until they named others allegedly belonging to a gay organization, she said, adding that police now have a list of 168 wanted gay men.

She said the arrests began during the Christmas holidays and blamed “all the noise that was going on surrounding the (same sex marriage prohibition) bill.”

Chairman Mustapha Baba Ilela of Bauchi state Shariah Commission, which oversees regulation of Islamic law, told the AP that 11 gay men have been arrested in the past two weeks. He said community members helped “fish out” the suspects.

“We are on the hunt for others,” he said, refusing to specify how many.

Bauchi state has both Shariah law and a Western-style penal code. Shariah is Islamic law, which is implemented to different degrees in nine of Nigeria’s 36 states.

Dozens arrested for being gay in north Nigeria – CBS News

Willingham’s job was to help athletes who weren’t quite ready academically for the work required at UNC at Chapel Hill, one of the country’s top public universities.

But she was shocked that one couldn’t read. And then she found he was not an anomaly.

Soon, she’d meet a student-athlete who couldn’t read multisyllabic words. She had to teach him to sound out Wis-con-sin, as kids do in elementary school.

And then another came with this request: “If I could teach him to read well enough so he could read about himself in the news, because that was something really important to him,” Willingham said.

Student-athletes who can’t read well, but play in the money-making collegiate sports of football and basketball, are not a new phenomenon, and they certainly aren’t found only at UNC-Chapel Hill.

A CNN investigation found public universities across the country where many students in the basketball and football programs could read only up to an eighth-grade level. The data obtained through open records requests also showed a staggering achievement gap between college athletes and their peers at the same institution.

This is not an exhaustive survey of all universities with major sports programs; CNN chose a sampling of public universities where open records laws apply. We sought data from a total of 37 institutions, of which 21 schools responded. The others denied our request for entrance exam or aptitude test scores, some saying the information did not exist and others citing privacy rules. Some simply did not provide it in time.

As a graduate student at UNC-Greensboro, Willingham researched the reading levels of 183 UNC-Chapel Hill athletes who played football or basketball from 2004 to 2012. She found that 60% read between fourth- and eighth-grade levels. Between 8% and 10% read below a third-grade level.