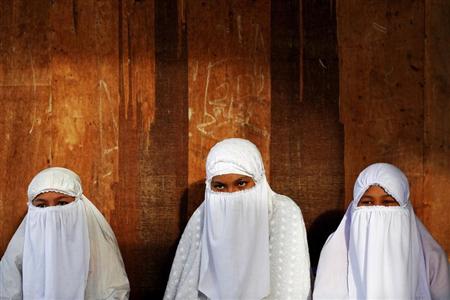 Large majorities in the Muslim world want the Islamic legal and moral code of sharia as the official law in their countries, but they disagree on what it includes and who should be subject to it, an extensive new survey says.

Suicide bombing was mostly rejected In the study by the Washington-based Pew Forum, but it won 40 percent support in the Palestinian territories, 39 percent in Afghanistan, 29 percent in Eygpt and 26 percent in Bangladesh.

Three-quarters of respondents said abortion is morally wrong and 80 percent or more rejected homosexuality and sex outside of marriage.

Over three-quarters of Muslims in the Middle East and North Africa, South Asia and Southeast Asia want sharia courts to decide family law issues such as divorce and property disputes, the Pew Forum on Religion and Public Life said on Tuesday.

Views on punishments such as chopping off thieves hands or decreeing death for apostates is more evenly divided in much of the Islamic world, although more than three-quarters of Muslims in South Asia say they are justified.